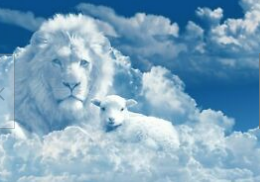 He shows up in chapter twelve as Narnia had come under a spell from the White Witch, making it “always winter, never Christmas.” Mr. Beaver introduced the great lion: “They say Aslan is on the move— perhaps has already landed.”

Not Safe but Good

When the children first hear the name Aslan, they had mixed reactions:

Edmund felt a sensation of mysterious horror. Peter felt suddenly brave and adventurous. Susan felt as if some delicious smell or some delicious strain of music had just floated by her. And Lucy got the feeling you have when you wake up in the morning and realize that it is the beginning of summer.

They find out Aslan is a king and hear a prophetic rhyme:

Wrong will be right, when Aslan comes in sight,

At the sound of his roar, sorrows will be no more,

When he bares his teeth, winter meets its death,

And when he shakes his mane, we will have spring again.

*“Susan asks, ‘Is he quite safe?’ ‘Safe?’ said Mr. Beaver, ‘....Course he isn’t safe, but he’s good.’ Eventually, Aslan appears and the battle between good and evil begins in earnest. As the story unfolds, Aslan shows up when and where he will. He does not appear often, almost never on demand, and always at his own discretion. And, he does not have to be visible in order for his power to be felt."

Yes, Aslan carried out the prophecy:

Wrong will be right, when Aslan comes in sight,

At the sound of his roar, sorrows will be no more,

When he bares his teeth, winter meets its death,

And when he shakes his mane, we will have spring again.

He lifted the curse, winter melted away, and everything blossomed and came back to life.

*"Throughout the Narnia stories we see in Aslan the attributes of Jesus. He is always present, whether or not we are aware of him. He is always working for our good, whether or not we understand (or even like what he does). He transforms us in ways we could never do for ourselves. Greatest of all, he sacrificed his life for us and has risen again to free us from the bondage of sin."

As I look back on this last year, evil has exalted itself in many ways in our own nation and worldwide. We have encountered deception, delusions, abuse, manipulation, division, strife, and suffering of many kinds at every turn. You could call it a winter season.

I’ve been watching for a rescue from Aslan to overthrow the darkness and death. This verse has ministered to me, so I wrote it in calligraphy of it and framed it alongside a lion photograph as a daily reminder.

Listen! Listen to the roar of his voice,

to the rumbling that comes from his mouth.

He unleashes his lightning beneath the whole heaven

and sends it to the ends of the earth.

After that comes the sound of his roar;

he thunders with his majestic voice.

When his voice resounds, 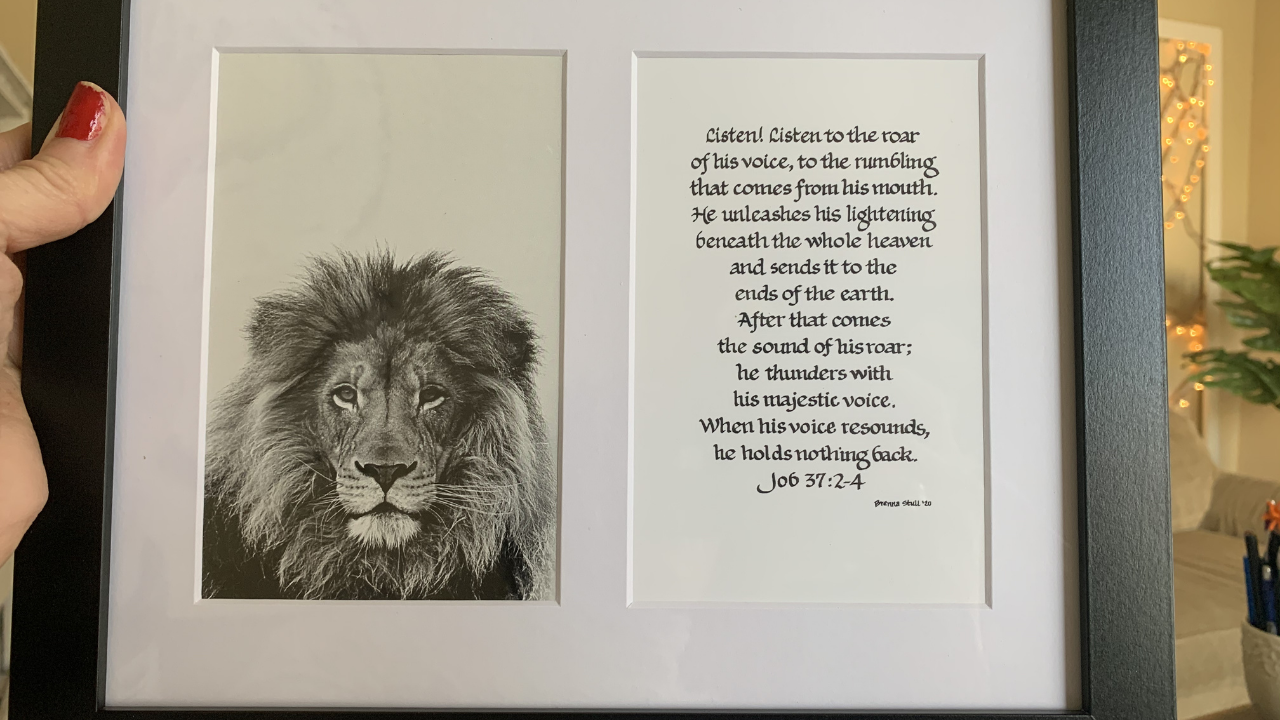 A Promise to Hold

Interestingly, my son was working on a project a few days ago and decided to form a sword out of cardboard. As we discussed how he would draw it, my husband came back with a large heavy sword in hand that our oldest son had hanging on his wall as a boy after we had read through the Chronicles of Narnia as a family.

Heavy and about four feet in length, it has Aslan’s head on its handle. Inscribed on the blade is: When Aslan shakes his mane, we shall have spring again. 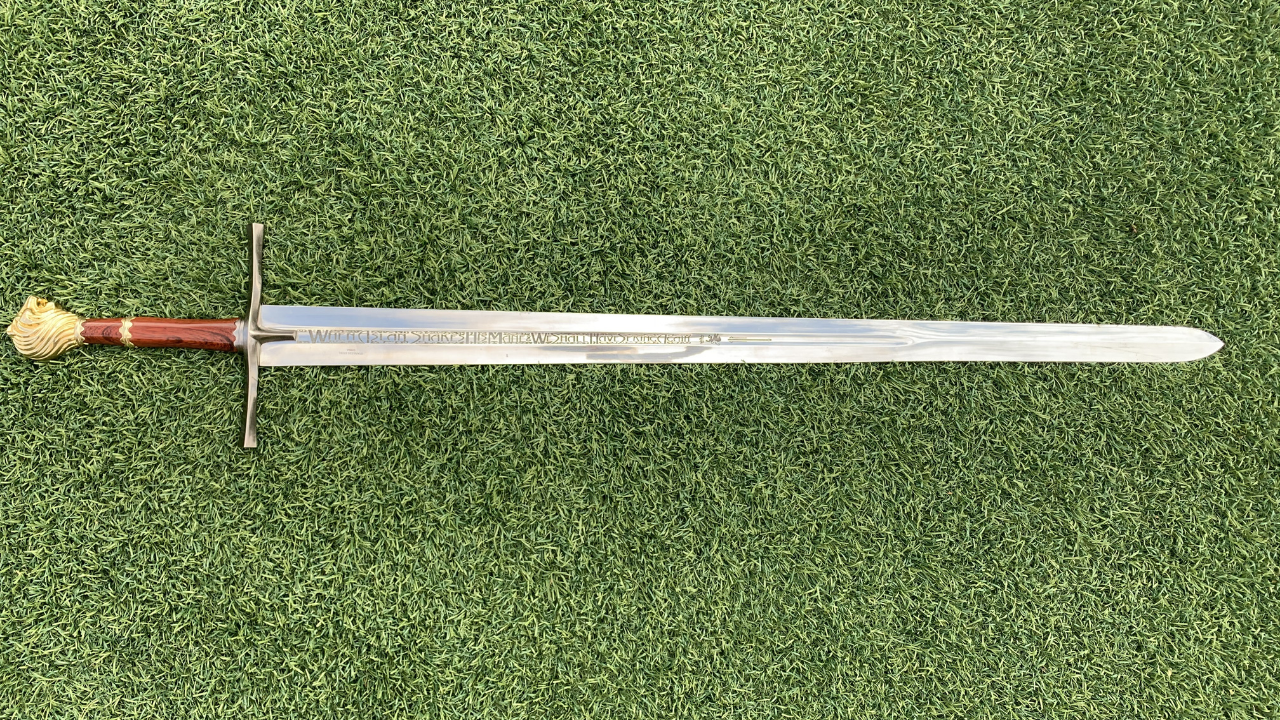 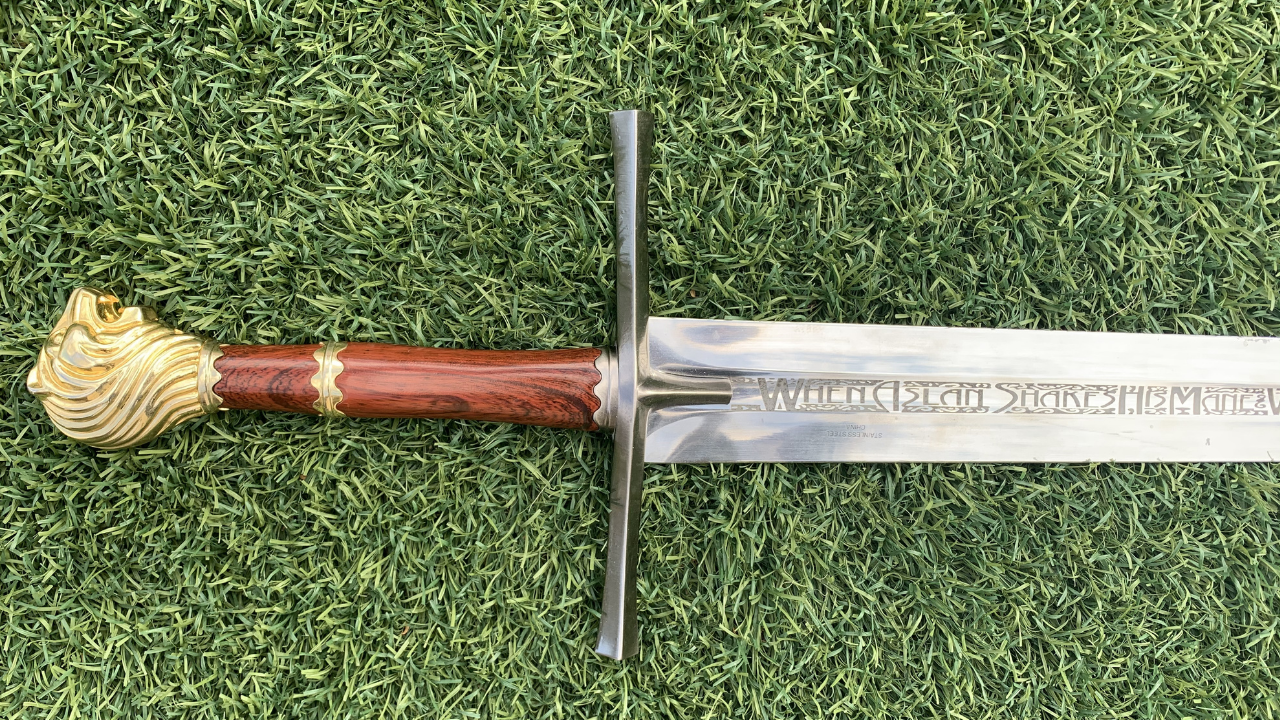 We shall have spring again. What a great physical reminder that the great Lion of Judah is in control in these "winter" days. When things look out of control, we know He’s got it. He is the God who always does things “at just the right time” (Rom. 5:6)

At Just the Right Time

At just the right time, when things looked hopeless for the Israelites, He parted the Red Sea, miraculously saving his people and then defeating their enemies.

Moses said to the people, “Don’t be afraid, stand firm and see the Lord’s salvation that he will accomplish for you today...The Lord will fight for you; you need only to be still.” Ex. 14:13

The Ancient of Days, who is the same yesterday, today, and forever, did save His people. They rejoiced, singing, “The Lord is my strength and my song; he has become my salvation. He is my God and I will praise him, my father’s God, and I will exalt Him. The Lord is a warrior; the Lord is his name.” Ex. 15:2-3

“They say Aslan is on the move— perhaps has already landed.” Are you watching for Him?

Father, I believe you will defeat the spiritual darkness and bring about the Great Awakening and Revival that many of us have felt you have promised. Help me to STAND, be still before you, and watch for your salvation.